On A Quest For...Freeing the West Memphis Three 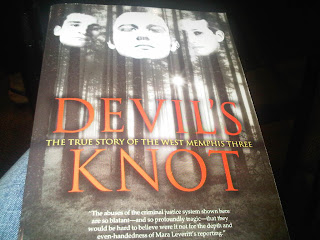 Went to the Laman Library "Meet the Author" series the other night and was impressed with the expertly  researched book of award winning author, Mara Leveritt, Devil's Knot...The True Story of the West Memphis Three. The case dates back to May 5, 1993 when three eight year olds were horrifically murdered in West Memphis, Arkansas.

The chronology {of Devil's Knot} is the first time all elements of the case have been assembled in one narrative, which offers surprises, even for those familiar with the events.  As such, it is a true public service.  __Arkansas Democrat Gazette

Bought the book and yes, it is simply remarkable as Leveritt adeptly informs the reader of fascinating facts that, we the public, may not have been aware of at that time or even today! I am ashamed to say that although I lived in the Memphis area at the time of the murders, I had no idea of the facts, frenzy, and corruption that  become associated with the case.  Buy the book or check out the website associated with the West Memphis Three. Determine for yourself what many say is the injustice of these three guys and the real horror that lurks among us...our judicial system and biased critical opponents. And, heaven help any of us who are considered "different, crazy, or odd" by socially conservative do gooders! Oops, sorry... guess I was being a wee bit critical there...I always thought it was kinda nice being different from the crowd...

What is your opinion or comment on this Paradise Lost??? And, check out that "Meet the Author" series at the Laman Library!
Posted by Dianne Montgomery Hocut at 9:13 AM