Had dinner at the relocated Rocket Twenty One in the downtown Argenta area last Friday night. Seems like Mr. Fletcher moved his restaurant to the north side of town. Really don't understand. Says he has new and different plans for the old Twenty One location. The Hillcrest/ Kavanaugh area is wonderful and maybe his next adventure there will be even better.

The new spot seems to be doing OK however, it needs a little work. Like maybe hiring another server to help the poor guy who waited on our table and all the other tables that night in the small and cozy newly built quarters on the north side of the Wyndham. The server did his best but we really deserved a little more attention than we got with prices being as high as they were. Same for the other tables. I had the nicely cooked Salmon on a bed of tasty, purple splashed quinoa, a puny green salad, an extra baked potato, and a Coor's Light. Mike had the tasty Pork Tenderloin with a cranberry sauce, included mashed potatoes, a puny green salad, and two Miller Lites. Our bill was around $80 bucks including tip. A little pricey. Probably won't return. There are just too many other wonderful restaurants with better food, prices, and service in the area. Sure hope it works out, though, because the Argenta area is so delightful and in much need of more food establishments. And  BTW, Twenty One has a super nice and cool manager who escorted us to the new area...remember Donnie from Bobbisox...yep. 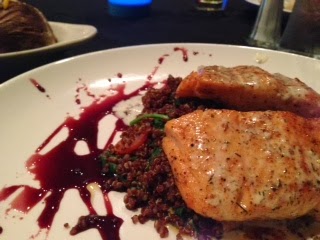